(CNN)Former President Donald Trump and attorney Rudy Giuliani are being accused of conspiring with the far-right groups Proud Boys and Oath Keepers to incite the January 6 insurrection in a civil lawsuit filed Tuesday in federal court by the Democratic chairman of the House Homeland Security Committee. The suit cites a post-Civil War law designed to combat violence and intimidation by the Ku Klux Klan.

The lawsuit, filed by Mississippi Democratic Rep. Bennie Thompson in his personal capacity, is the first civil action filed against the former President related to the attack at the US Capitol and comes days after the Senate acquitted Trump in his impeachment trial. 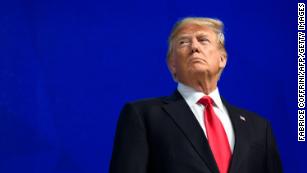 This is Trump’s heaping list of legal problems post-impeachment
If it proceeds, it would mean the former President and others would be subject to discovery and depositions, potentially exposing details and evidence that weren’t released during the Senate impeachment trial.
RELATED: This is Trump’s heaping list of legal problems post-impeachment
Thompson points to Trump’s words and tweets in the months leading up to the insurrection to accuse Trump and Giuliani of mobilizing and preparing their supporters for an attack to prevent Congress from certifying the 2020 election results on January 6.
The lawsuit cites a scarcely used federal statute passed after the Civil War that was intended to combat violence from the Ku Klux Klan; it allows civil actions to be brought against people who use “force, intimidation, or threat” to prevent anyone from upholding the duties of their office.
The NAACP is backing the lawsuit and helping to represent Thompson in court. 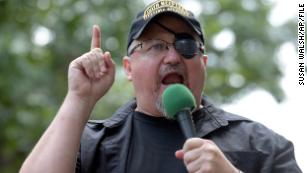 Some of his followers are being sought by the FBI. It’s not stopping the leader of the Oath Keepers.
“As part of this unified plan to prevent the counting of Electoral College votes,” the lawsuit states, “Defendants Proud Boys and Oath Keepers, through their leadership, acted in concert to spearhead the assault on the Capitol while the angry mob that Defendants Trump and Giuliani incited descended on the Capitol. The carefully orchestrated series of events that unfolded at the Save America rally and the storming of the Capitol was no accident or coincidence. It was the intended and foreseeable culmination of a carefully coordinated campaign to interfere with the legal process required to confirm the tally of votes cast in the Electoral College.”
READ: Former President Donald Trump’s January 6 speech
The former President and many Republicans argued the impeachment trial was unconstitutional because he is no longer in office. As such, Thompson notes Senate Minority Leader Mitch McConnell’s speech Saturday where the Kentucky Republican seemed to encourage litigation against Trump.
“We have a criminal justice system in this country. We have civil litigation,” McConnell said after voting to acquit Trump. “And former presidents are not immune from being accountable by either one.”
Jason Miller, a spokesman for Trump, said the former President did not incite or work to incite riots at the Capitol. 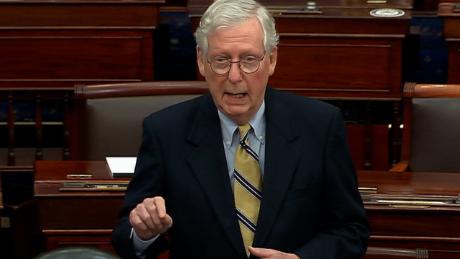 McConnell blames Trump for riot, but voted to acquit anyway 20:27
“President Trump has been acquitted in the Democrats’ latest Impeachment Witch Hunt, and the facts are irrefutable,” Miller said in a statement. “President Trump did not plan, produce or organize the Jan. 6th rally on the Ellipse. President Trump did not incite or conspire to incite any violence at the Capitol on Jan. 6th.”
Giuliani did not immediately respond to a request for comment.
House Speaker Nancy Pelosi has been briefed on the lawsuit, a source tells CNN.
Discussing the lawsuit later Tuesday, Thompson told CNN’s Chris Cuomo that “we can’t allow the rioters’ activities just because people disagree with the outcome of an election. People should not have overrun the Capitol to stop the confirmation of the election. That’s just not who we are.”
In recounting his experiences inside the Capitol on the day of the riot, the congressman cited how Emmett Till — a 14-year-old whose brutal murder in 1955 spurred the nation to action on civil rights — had been killed in his district.
“A lot of atrocities have occurred in my state, and so all that was going through my mind at that time, that, is it coming to an end over an election?” he said on CNN’s “Cuomo Prime Time.”
Thompson continued, “I thought elections were a way that civilized people resolved their differences. But obviously, those individuals who attempted, well, succeeded in breaking into the Capitol had a difference of opinion. I resent that — I know this country is greater than what I experienced that day, and I’m prepared to go to court and defend that greatness.”

Thompson’s lawsuit ties Trump’s repeated refusal to accept the election results in the weeks after November 3 to the threats of violence against elected officials like Michigan Secretary of State Jocelyn Benson, accusing Trump of endorsing the threats rather than denouncing them. The lawsuit also alleges that Trump’s refusal to directly condemn the Proud Boys during the first Presidential debate in September encouraged their violent plans leading up to January 6.
The lawsuit links the hours-long standoff at the Capitol directly to Trump’s rally earlier in the day where the former President told his supporters, “…if you don’t fight like hell, you’re not going to have a country anymore.” 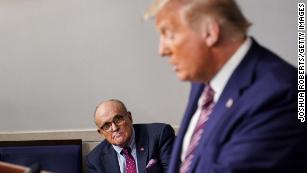 READ: Democrat’s lawsuit against Donald Trump over US Capitol attack
Trump also said, “You have to show strength, and you have to be strong.”
Giuliani, the lawsuit alleges, also riled up the crowd by continuing to talk about unfounded allegations of widespread voter fraud and telling supporters on January 6: “Let’s have trial by combat.”
The lawsuit accuses Trump of delaying the delivery of his speech to the crowd at the Ellipse on January 6 as a way to give the Proud Boys time to get to the Capitol and overcome the police presence there, though there is no evidence provided that Trump’s speech was delayed or that any delay was intentional.
In addition to Trump and Giuliani, the lawsuit names the Proud Boys and Oath Keepers as defendants.

This Republican senator just said that January 6 wasn’t an ‘armed insurrection’
Several members of these far-right groups have been charged for their involvement in the riot. The Justice Department has charged more than a dozen Proud Boys so far for storming the Capitol, and recently brought conspiracy charges against a group of five people associated with the group. DOJ also indicted three members of the Oath Keepers in late January, including one member, Jessica Watkins, whose attorney told the judge last week that she believed she was following directions from Trump.
The lawsuit has been randomly assigned to Judge Amit Mehta, an appointee of former President Barack Obama. Mehta has handled various lawsuits related to Trump’s financial records. In 2019, he ruled that Trump financial firm Mazars USA had to turn over records to Congress. He also earlier denied a request from House Democrats, in the minority at the time, attempting to get Trump hotel records from the General Services Administration.

The legal underpinnings of the lawsuit could face an uphill battle in court, since the KKK statute has not been widely used.
“It was specifically meant to provide federal civil remedies for federal officers who were prevented from performing their duties by two or more individuals, whether federal marshals in the post-Civil War South, federal judges in un-reconstructed lower courts; or federal legislators,” University of Texas Law professor and Supreme Court analyst Stephen Vladeck explained. 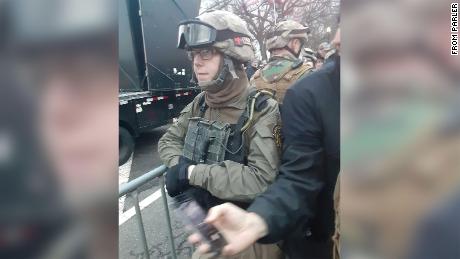 DOJ: Oath Keeper leader waited for Trump’s direction 02:40
“It’s not at all hard to see how that provision maps onto what happened on January 6 — where, quite obviously, two or more people conspired to prevent the Joint Session of Congress from performing its constitutional function of certifying President Biden’s Electoral College victory. The harder question is whether Trump himself can be connected to that conspiracy,” Vladeck said.
Attorney Joseph Sellers, who is representing Thompson, said that the specific purpose of the statute was to provide a remedy against efforts to interfere with Congress’ duties.
“The fact that there’s very little precedent [involving this section of the statute] is a reflection of how extraordinary the events were that give rise to this lawsuit,” Sellers said.
Other members of Congress, including Democratic Reps. Hank Johnson of Georgia and Bonnie Watson Coleman of New Jersey intend to join the lawsuit as plaintiffs, according to a statement that accompanied the lawsuit.
“While the majority of Republicans in the Senate abdicated their responsibility to hold the President accountable, we must hold him accountable for the insurrection that he so blatantly planned,” Thompson said in the statement. “Failure to do so will only invite this type of authoritarianism for the anti-democratic forces on the far right that are so intent on destroying our country.”
This story has been updated with comments from Thompson and additional details of the lawsuit.

CNN’s Caroline Kelly and Katelyn Polantz contributed to this report.